Go Digital – The Only Option for the World Events Industry

Affected by the health crisis that has condemned all trade fairs with thousands of participants, the events sector is forced to make a rapid transformation, relying much more on virtual and "hybrid" formats, many of the events will go digital.

Throughout the world, confinement and traffic restrictions have led to a cascade of cancellations and postponements for tradeshows and exhibitions. And while the health uncertainty linked to Covid-19 continues, some major events scheduled for the second half of 2020 or even 2021 have already been cancelled.

The Geneva Motor Show - 600,000 visitors - whose 2020 edition had been cancelled, will not be held next year either: in a survey, a majority of the usual exhibitors indicated that they would probably not participate.

Still in Switzerland, the major watchmaking exhibition Baselword, which was already running out of steam, has cancelled both the 2020 and 2021 editions.

In the French capital, the "Mondial de l'Auto", renamed the "Paris Motion Festival" and due to be held next October, has also been cancelled "in its present form".

In Italy, a country hard hit by the pandemic, a sector with an annual turnover of 36 billion euros and 570,000 jobs is faltering.

In the space of a few months, the entire tradeshows, congress and exhibition industry must "redefine the way it operates," says Pablo Nakhlé Cerruti, managing director of Viparis, which manages nine venues in and around Paris, including the Porte de Versailles, Villepinte and Le Bourget exhibition centers.

It is now a question of speeding up the "connectivity" and also "flexibility: our venues must be able to host all possible types of events, adapting to demand on a day-to-day basis".

But can all trade fairs go digital? Especially since these big crowds are also often an opportunity to conclude contracts, talk to investors and exchange business cards – contacts that cannot be transposed virtually.

"That's also what we value, that industry leaders can do dozens of meetings in a row and meet different types of contacts in one place. We have two million business meetings during the congress in normal times, and 10 billion euros in transactions that take place," she points out.

The 2021 edition of the MWC in early March is moving towards a "hybrid" format, which will alternate between physical and online: "until then, we will be testing, at local events, several virtual platforms in terms of content and functionalities, and we will adjust according to the feedback".

In Davos, the World Economic Forum, a must-attend event for big business, bankers and politicians, will be held in January, but in an "unprecedented configuration, which will include both face-to-face and virtual dialogues," says the organization. 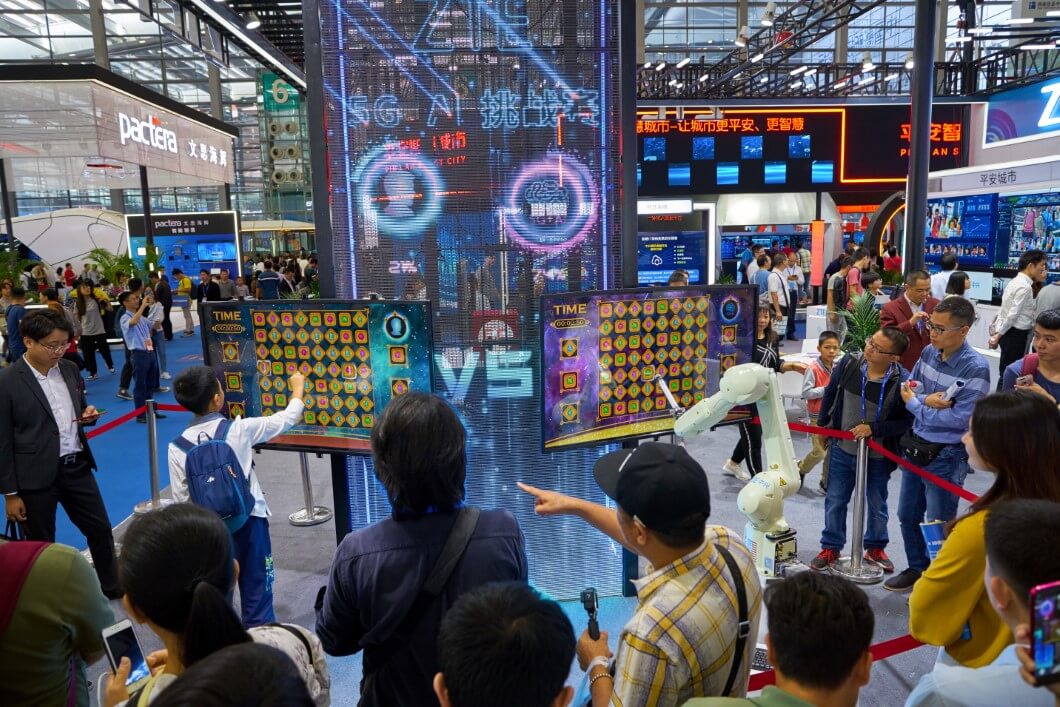 A "hybrid" format has also been chosen by the large CES technology show in Las Vegas, which had welcomed nearly 175,000 visitors in January 2020, and which warns that its 2021 edition will be "smaller" because "fewer people will be able to travel to the United States".

The CES will, in particular, set up a "platform" for exhibitors to present their innovations virtually.

In Germany, the Berlin tourism trade fair, the world's leading trade fair for the tourism sector, had already organized around 20 live streams in March this year, and its 2021 edition will include a "digital part".

As for the IFA, the new technologies fair in Berlin, it should take place at the beginning of September, but in a very small committee. In Frankfurt, the famous Frankfurt Book Fair will also be largely replaced in October by online events.

In Paris, Vivatech, the 2020 private publishing technology and start-up fair will return in June 2021, although it will be "deeply hybrid". However, its managing director Julie Ranty says she is "convinced of the importance of the human link: the challenge is to succeed in injecting into digital the warmth and bonding that is found in physical events".

GERMAN MICE INDUSTRY, ONE OF THE LARGEST EMPLOYERS, IS IN CRISIS

ITALIAN TOURISM RECORDS GREATER SUCCESS THAN IN SPAIN AND FRANCE

CHRISTMAS MARKETS IN THE UK AMID THE PANDEMIC Video

SAFE TRAVEL? TOURISM CANNOT WAIT UNTIL EVERYONE IS VACCINATED

HYBRID EVENTS: THE FORMAT OF THE PRESENT AND FUTURE?

COVID EXPLOSION IN THE SEYCHELLES REPORTED DESPITE MASSIVE VACCINATION

SPONTANEOUS VACATIONS ARE BOOMING IN AUSTRIA

TOURISM IN GERMANY WELL BELOW THE PRE-CRISIS LEVEL