Covid Is Not the Only Threat to Tourism in Mexico

Last year, sargassum, which is a kind of seaweed epidemic, was the biggest environmental problem in Mexico and affected a large number of its beaches.

As a result of the coronavirus pandemic, Mexico’s tourism activity dropped by 5.3% in the first quarter of 2020 compared to the same period of 2019, as reported by the National Institute of Statistics and Geography (INEGI).

Between last January and March, the expenditure of both foreign and domestic tourists registered a 5% drop compared to the same period in 2019, the institution added in the statement. In addition, the total influx of travelers in the cultural tourism subset during the first half of the year was only 6,411,000, recording a 54% drop over the same period in 2019.

In this regard, Miguel Torruco Marqués, Mexico’s Secretary of Tourism, explained that the Covid-19 pandemic has put the industry in a surreal scenario with great challenges ahead.

“The closure of establishments, flight cancellations, dismissal of workers and restriction on events made us turn our eyes towards the hidden reality: the limited health system, workers lacking a solid social protection scheme, companies without reserves and liquidity, lack of responsibility and commitment of tourists to their social, cultural and natural environment, among other aspects, in which we must work together to protect activity from events like the one that currently afflicts us,” said Torruco Marqués.

He also argued that this pandemic had proven the existence of a tourist unfazed by crowded destinations, their interference in the daily life of residents of these tourist places, and the deterioration of the environment.

The Other Epidemic – A Threat to Tourism

Last year, sargassum was the biggest environmental problem in Mexico. It is a type of seaweed epidemic that hit Mexican beaches and was out of control. This species of macroalgae affected coastal ecosystems, causing the death of marine species such as turtles and fish.

According to Greenpeace, this seaweed represents a threat to human health due to its decomposition on beaches which causes pollution due to its high content of arsenic and heavy metals, among other factors.

The reason for the large quantities of this seaweed washing ashore on coastal waters and Mexican beaches is linked to human activity: the increase in the temperature of the ocean surface due to climate change, which favors its reproduction; changes in ocean currents due to the melting of the poles and glaciers, which increases the appearance of sargassum; wastewater discharged into the sea; and the use of agrochemicals in agriculture, which carry nutrients for these organisms. 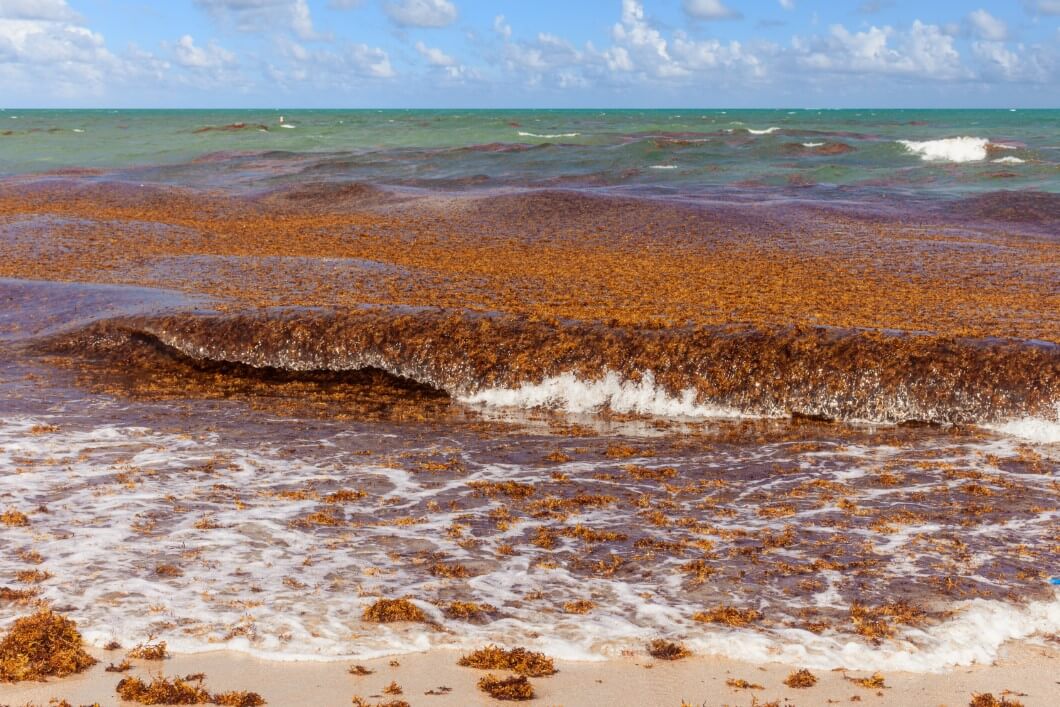 One of the most damaging collateral effects of sargassum is that almost 40% of the Mesoamerican Barrier Reef System (MBRS) was infected with a disease called White Syndrome, which destroys corals and reefs.

The appearance of sargassum also had consequences for the members of the Cancun and Puerto Morelos Hotel Association, whose occupancy levels dropped 75% at the start of July 2019.

In 2018, about 500,000 tons of the seaweed reached the Caribbean coast, according to the Sargassum Monitoring Network in Cancun.

However, this year there was a decline in seaweed on Caribbean beaches. Esteban Amaro, a coordinator and one of the biologists that make up the Sargasso Monitoring Network, points out that the sargassum problem was followed by the coronavirus pandemic and its subsequent decrease in tourism. Unlike other years, the government allocated a significant amount for the Sargassum Program, which is run by the Secretary of the Navy, explains Amaro.

According to the hydrobiologist from the Metropolitan Autonomous University in Mexico, 5,000 meters of the floating barrier has been placed in different locations of tourist importance, although he also adds that the Government’s efforts have not been enough to face the great challenge that sargassum represents.

For Amaro, more action is needed. Just the coastline of different tourist spots, like Cancun’s Playa del Carmen, Puerto Morelos, Cozumel and Mahahual would need at least 10 times more than that. “It is a good start, but they have fallen short,” he said.

Even the efforts of hotel managers, who have rented seaweed removal equipment and placed barriers, have not lessened the problem.

“All have been insufficient efforts. The amount of sargassum that washes ashore on the Mexican coast is thousands of tons, making all efforts look small compared to the magnitude of the problem,” explained Amaro.

MEXICAN CARIBBEAN TO OFFER DISCOUNTS DUE TO SARGASSUM SEAWEED

THE YEAR WITHOUT TOURISM ENDS, WHAT NOW?

THE CRISIS MAY BOOST RESPONSIBLE TOURISM – BUT NOT TOO MUCH

NEW AIRLINES LAUNCHED IN EUROPE DESPITE THE CRISIS